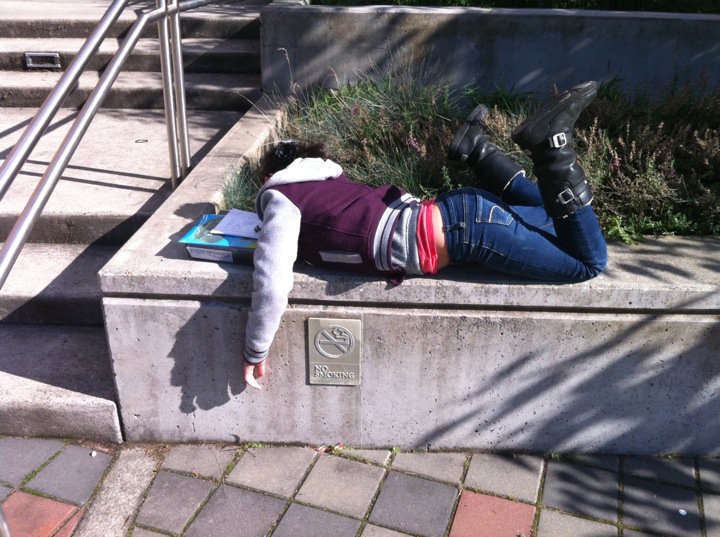 (Thats me taking a nap on campus in the picture above lol. Someone caught me red-handed!)

If you want to know how to cope, you can skip the first paragraph and read the second one.

I never realized how many people don’t know that I have Tourette’s. Being at Bellevue College (former community college) for four years, I just assume people know! But that’s not good to assume. One time, I was hastily running around campus a lot to get errands done and to stop by my instructor’s office and to finish up homework all at once. I literally went all over campus. The thing I didn’t know happening was my science instructor, Mr. Fuller (an awesome, sweet, kind, geeky entomologist) was advocating for me all over the place because many students, instructors, and staff had no clue why I was screaming, shouting, stomping, and jumping. They probably thought I was some crazy, hyper student running around for no reason and shouting for no purpose. I was waiting for Mr. Fuller to be done with his class so I can talk to him and while I was waiting, I had intense tics as usual. I’d jump, clap my hands, shout out “hey!”, and stomp. Students were freaking out in his classroom, but because he didn’t want his students to embarrass themselves out of ignorance (and to educate them of course), he stopped lecturing and explained to the entire class about who I was and what I had. He also took the liberty to explain to other faculty, staff, and instructors who were super concerned when I was walking in and out of the faculty area. Some instructors wonder how I’m able to cope with my Tourette’s in class! Well, teachers all over the world, here’s my answer: I just do. lol

Nothing ordinary View All Posts